Bhey Langdrag Nye (sacred place) in Wangdue Phodrang is one of the many places blessed by Guru Rinpoche, the Great Indian Buddhist Master who spread Buddhism in Bhutan in 7th century. He has blessed numerous places and left hidden treasures those places.

Through­out the ages, in the heart of a hidden valley lay a sacred secret site. The des­tined dis­cov­ery of this spir­i­tual legacy is flour­ish­ing with an un­de­filed vi­brancy today. The legacy of Bhey Langdrag is embedded in the esoteric traditions of Vajrayana Buddhism. In 1950, the renowned yogi Togden Shakya Shri was in Tsari, Tibet. There, he witnessed an oracle of but­ter lamps that lit by them. The Togden revealed to Lama Sonam Zangpo that the event foretold the dakinis prophecy. Lama Sonam Zangpo was asked to locate a sacred site between the ‘three sertos,’ which were the three dzongs of Trongsa, Wangdue and Punakha.

Later, Lama Sonam Zangpo passed on the instructions to Lama Serpo, a renowned Dzogchen master Subsequently in 1981, Lama Serpo instructed Lungten Trulku to visit the site and make ‘tsok’ offerings there. Lungten Trulku reported to Lama Serpo about all the sacred imprints and landmarks of Guru Rinpoche. He also apprised that there were no standing structures of any sort at the place. Two years after Lama Sonam Zangpo passed away, Lungten Trulku discovered details about the site in sacred texts. It was stated that Guru Rinpoche returned from Zangdopelri for a seven days sojourn in Bhey Langdrag. On his arrival, Terdak Langdrapa, a local deity, caused obstacles to the Guru, However, manifesting as Ugyen Dorji Guru, the Guru transformed the deity and appointed him as the protector of the treasure teachings. The Guru has hidden about 60 trea­sure teach­ings there.

When he was about to leave, a dakini appeared before him and instructed him to look at the cliff. On the cliff, he saw Guru Rinpoche as an eight-year-old boy emanating from a rainbow. The Guru thus instructed him: “My son, do not leave. You are the destined treasure revealer.” The Terton then entered into a retreat.

On the tenth day of the eighth month in retreat, the Guru again ap­peared to him. The Guru in­structed him that if one saw Bhey Langdrag, one would be freed from samsara; if one visited it, all defilements would be purified; if one practiced dharma here, one would find spiritual fulfillment and realize all the yidam practices; if one make offerings here, all aspirations for all life­times would be ful­filled.

Bhey Langdrag is also a gateway to be reborn into Zangdopelri or Dewachen. The Terton then discovered the treasure teaching called ‘Chenrezig Nyensong Khenchop.’ This has led to the an­nual Mani Dungdrup held every year in the 8th month. The be­lief holds that Chen­rezig him­self stated: “If one spon­sored the whole Dungdrup for a day, a meal, tea or just made of­fer­ings of fire­wood, one would be freed from sam­sara. If the Mani Dung­drup is held for one year, it is equivalent to holding the 16 day Nyung­nay Karpo Chagay.”

Despite Guru Rinpoche and many great Tertons like Pema Lingpa and Sherab Mebar consecrating Bhey Langdrag, it remained hidden even to Bhutanese throughout the ages. In 1986, Lungten Trulku went to Yourmo in Nepal and approached Chabje Chatrul Rinpoche. In 1988, Chabje visited Bhutan and petitioned His Majesty King of Bhutan about the spiritual discovery. He then stated that although there were many sacred spiritual places in the world, the discovery of Bhey Langdrag was very significant; firstly, it had a very sacred legacy and secondly it had not been defiled over time.

He also remarked that all Bhutanese who could now visit the site had more merit than those who had passed away. On his in­struc­tions, a retreat center named Drubdra Waeser Samteling was constructed at the foot of the valley in 2000, he appointed Lungten Trulku as the destined lama, to construct a temple in Bhey Langdrag. The temple housed a ten-foot tall statue of Ugyen Dorji Guru, two six-foot tall statues of Khandro Yeshey Tshogyal and Khandro Mendarawa. On every auspicious month of Choethri and Tendra, the fourth and ninth month and on the Guru’s auspicious days, thousands of people visit the site regularly. 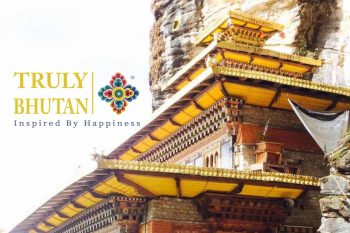 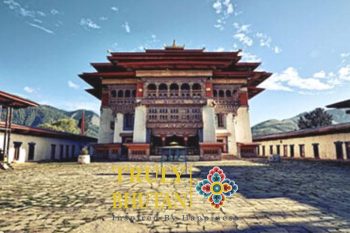 Perched on a hillock overlooking the Phobjikha valley, the Gangtey Gompa is the largest Nyingmapa monastery in western Bhutan 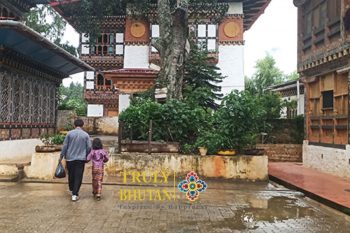 The temple of Sha Radap, the guardian deity of Wangdue Phodrang region is worth paying a visit. The temple located close to the town 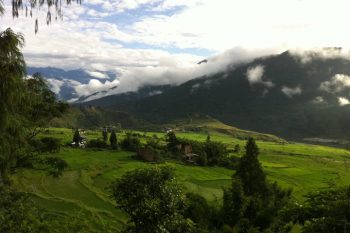 East of Wangdue province lays the region of Shaa. The region celebrates Bonko (an animist festival) once in every three years 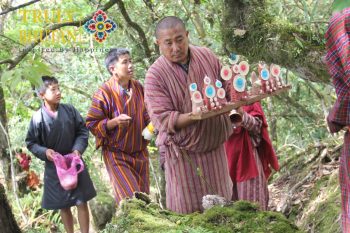 Enjoy the delights of the two villages in the west of the province. Take picnic lunches and drive to these villages on day excursions 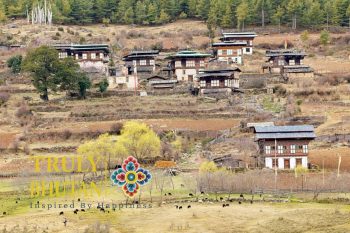 To experience the grandeur of these villages, you must prepare yourself for a tented night. You could also use a farmhouse stay and help distribute tourism